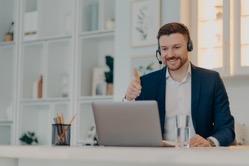 After the recent addition of memoji-like avatars to its video conferencing platform, Zoom is now looking to add gesture recognition, a feature already available for the Zoom app on iOS and iPadOS, to its PC apps.

Revealed in its April product update blog post on April 19th, the new feature now brings support for Windows and Mac Zoom users to do the ‘raised hand’ and ‘thumbs up’ gestures in real life, and have the same translated to a corresponding in-app reaction.