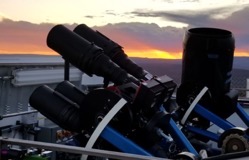 OSU astronomers have detected 116,000 new variable stars, according to a new article.

All-Sky Automated Survey for Supernova (ASAS-SN), a global network of 20 telescopes that can peer into the cosmos at a depth 50,000 times greater than the human eye, discovered these celestial bodies. The study has been run by Ohio State researchers for nearly a decade.

Now, in a paper posted on arXiv, an open-access preprint server, researchers explain how they used machine learning to find and classify variable stars, which are objects in space whose brightness changes over time, especially when seen from Earth.

Observing the variations in these stars’ properties over time can give us valuable insights into their masses, radii, temperatures, and even their chemical makeup. As a matter of fact, our sun is a variable star. According to Collin Christy, the primary author of the article and an ASAS-SN analyst at Ohio State, surveys like ASAS-SN are particularly useful for identifying systems that can expose the intricacies of stellar processes.