Every year, TIME highlights inventions that are making the world better, smarter and even a bit more fun. (See last year’s list here.) To assemble our 2020 list, we solicited nominations both from our editors and correspondents around the world, and through an online application process. We then evaluated each contender on key factors, including originality, creativity, effectiveness, ambition and impact.

I love California, but I had to leave. I grew up in Fremont, attended Stanford, and have spent most of my adult life in the San Francisco Bay Area, founding technology companies like Palantir and Addepar and investing in many others. In 2011 I founded 8VC, a venture-capital firm that today manages more than $3.6 billion in committed capital. Few top venture capitalists consider living anywhere other than California and a handful of global financial centers, but I am moving myself and dozens of my 8VC colleagues...

Image: Wonder Land: After months of the pandemic, protests and failing progressive leadership, many are going to move out of U.S. centers. Images: Getty Images Composite: Mark Kelly

In the 1970s, Houston was the undisputed oil capital of the world and with that went “attitude.” Bob Harvey, president of the Greater Houston Partnership, is keen to separate the new Houston — the one that he’s working to improve – from the old Houston, all the while recognizing that oil built the city and the fracking revolution gave it a great boost.

Harvey is a dynamic Houstonian and a 17-year veteran of McKinsey & Company, the global management consulting firm. The Greater Houston Partnership is a 1989 amalgam of what was once the Houston Chamber of Commerce (founded in 1840), the Houston Economic Development Council, and the Houston World Trade Association.

Image: The Texas Medical Center is key to Houston's plan to reposition itself from an oil capital to an innovation hub. CREDIT: BRYAN MALLOCH

The results of this year’s McKinsey Global Survey on artificial intelligence (AI) suggest that organizations are using AI as a tool for generating value. Increasingly, that value is coming in the form of revenues. A small contingent of respondents coming from a variety of industries attribute 20 percent or more of their organizations’ earnings before interest and taxes (EBIT) to AI. These companies plan to invest even more in AI in response to the COVID-19 pandemic and its acceleration of all things digital. This could create a wider divide between AI leaders and the majority of companies still struggling to capitalize on the technology; however, these leaders engage in a number of practices that could offer helpful hints for success. And while companies overall are making some progress in mitigating the risks of AI, most still have a long way to go.

The Johns Hopkins Coronavirus Resource Center was called “2020’s Go-To Data Source” by the magazine. The dashboard, which reported Wednesday the U.S. recorded 250,000 coronavirus deaths, has tracked the spread of coronavirus around the world.

The annual list, which was announced Thursday, recognized 100 groundbreaking inventions that “are making the world better, smarter and even a bit more fun.” 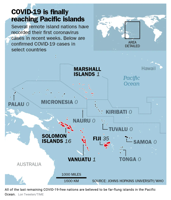 Eight months after the World Health Organization declared a global pandemic, COVID-19 is reaching the last places on Earth that remained untouched by the coronavirus.

On Wednesday, Vanuatu, a Pacific island nation about 1,200 miles northeast of Australia, reported its first COVID-19 case. Two other countries in the Pacific Ocean, the Marshall Islands and Solomon Islands, reported their first infections in October. In Samoa, workers who serviced a ship with COVID-19-positive crew members are in quarantine.

Image: All of the last remaining COVID-19-free nations are believed to be far-flung islands in the Pacific Ocean. Lon Tweeten/TIME

Since its launch in 2014, the company has been known by many names - including Hyperloop Technologies, Hyperloop One, and Virgin Hyperloop One - but has always been focused on one goal: transforming the way people travel. Six years later, Luchian and Giegel traveled 48 meters per second on a 500-meter journey through the Nevada desert. "We took a big step towards that last dream," Giegel said in a statement . "Not just for me, but for all of us who are looking towards a full moon here on Earth."

Your email is safe with us. We won't share it. Period. Richard A. Bendis is the Founder, President and CEO of Innovation America (IA), a global innovation intermediary focused on accelerating the growth of the entrepreneurial innovation economy Internationally and in America.