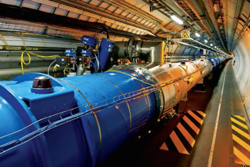 The Large Hadron Collider restarted Friday after a three-year break for upgrades that will allow it to smash protons together at even greater speeds, in the hope of making new ground-breaking discoveries.

It plans to further study the Higgs boson, the existence of which it proved in 2012, and put the Standard Model of particle physics to the test after several recent anomalies raised questions about our fundamental understanding of how the universe works.