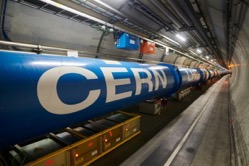 The world’s most powerful particle accelerator – the Large Hadron Collider (LHC) – has sprung back to life after a three-year shutdown.

After planned maintenance and upgrades, it has been turned back on and will shortly start another run of cutting-edge physics experiments.

The LHC, at Cern, on the French/Swiss border near Geneva, was switched off in 2018 to let scientists and engineers from around the world make it even more powerful.

On Friday, particles were pushed through the collider’s almost 17-mile ring for the first time since December 2018.