OSU trustees are aligning their committee structure with a new umbrella office for innovation in the administration of President Kristina Johnson.

Image: The Ohio State seal displayed at an entrance to campus. DOUG BUCHANAN

The future of urban air mobility is often represented in utopian images. A wealth of fanciful renderings show flying vehicles taking off and landing vertically from glittering vertiports. The people in these portrayals live in fantastical futures of high-tech cities, maneuvering experiences that we’ve seen only in science fiction films.

Many policy decisions on the pandemic -- in Washington and locally -- are driven by an online data tool developed at Johns Hopkins University. Correspondent David Begnaud spoke to one of the people behind the site. 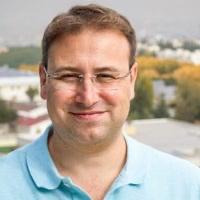 Entrepreneurs are inherently problem-solvers. After all, we start our businesses because we recognize a need that needs to be filled. Take me, for instance: Part of my previous job at an internet media company was to create tools for editors to build forms, surveys and polls. The problem was that at the time, the form-building landscape offered few good options. I decided to change that, and my company, JotForm, was born.

Most entrepreneurs have learned that it’s almost always quicker and easier to get cash from someone you know, rather than angel investors or professional investors (VCs). In fact, most investors “require” that you already have some investment from friends and family before they will even step up to the plate.

Tweet Post Share Save Print While many people think of migraine attacks as little more than bad headaches, migraine is in fact a chronic condition whose symptoms can be far more debilitating than an ordinary headache. Migraine attacks are often accompanied by intense pain, difficulty thinking, changes in vision, dizziness, nausea, and increased sensitivity to light, noise, and smells.

Establishing a positive organizational culture, one in which employees and managers support one another, should be a top priority for organizations. Expressing praise and gratitude is particularly important for keeping up morale. Gratitude makes people feel valued, and positive feedback has been shown to mitigate the negative effects of stress on employee performance. Neuroscientists have even shown that the brain processes verbal affirmations similarly to financial rewards.

The European venture capital industry is not sufficiently backing the kinds of fundamental innovations that will help the bloc keep up in the 21st century, according to members of the new EU-backed fund investing directly into startups.

"Corporate culture" is difficult to define. Often it's only implicitly understood and develops organically, rather than being explicitly expressed and planned from the top down. Your company's culture becomes its personality, and has a major influence on how the public perceives it, as well as how the employees, partners and other providers interact with the public and with each other.

Take a moment and think about your salary and wages. Your bonuses. Your stock options. What explains how much (or how little) you make? Is it your education? Your experience or seniority? Your organization’s performance, the cost of living in your area, your occupation, or your own individual performance?

Goldfish may look small and cute in your home, but in the wild it's a different story. Releasing them into your local stream or lake is a bad idea. Following is a transcript of the video.

Right now, Washington state is fighting off an invasion! The culprit? Goldfish. Yup, you heard right.

Thousands of goldfish have infested the West Medical Lake and are crowding out the native fish population. How did this happen? The Department of Fish and Wildlife thinks that a few irresponsible pet owners are to blame. And while the goldfish may have cost the owners a few dollars, this mess is going to cost the state an estimated $150,000 to try to remove these feral fish.