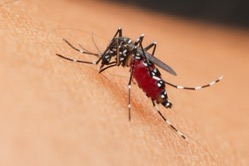 Scientists have managed to turn one of the deadliest insects into a vaccine delivery system. According to new reports from NPR, a clinical trial for a system meant to use mosquitoes to deliver vaccines has been underway in the United Kingdom. The findings of the trial have been published in Science Translational Medicine.

According to the paper, scientists were able to genetically modify parasites to deliver malaria vaccines through mosquito bites. It’s an intriguing proposition to use mosquitos to deliver vaccines. It sounds horrific on paper and even more horrific when you see the photos featured in a report on the trial from NPR.